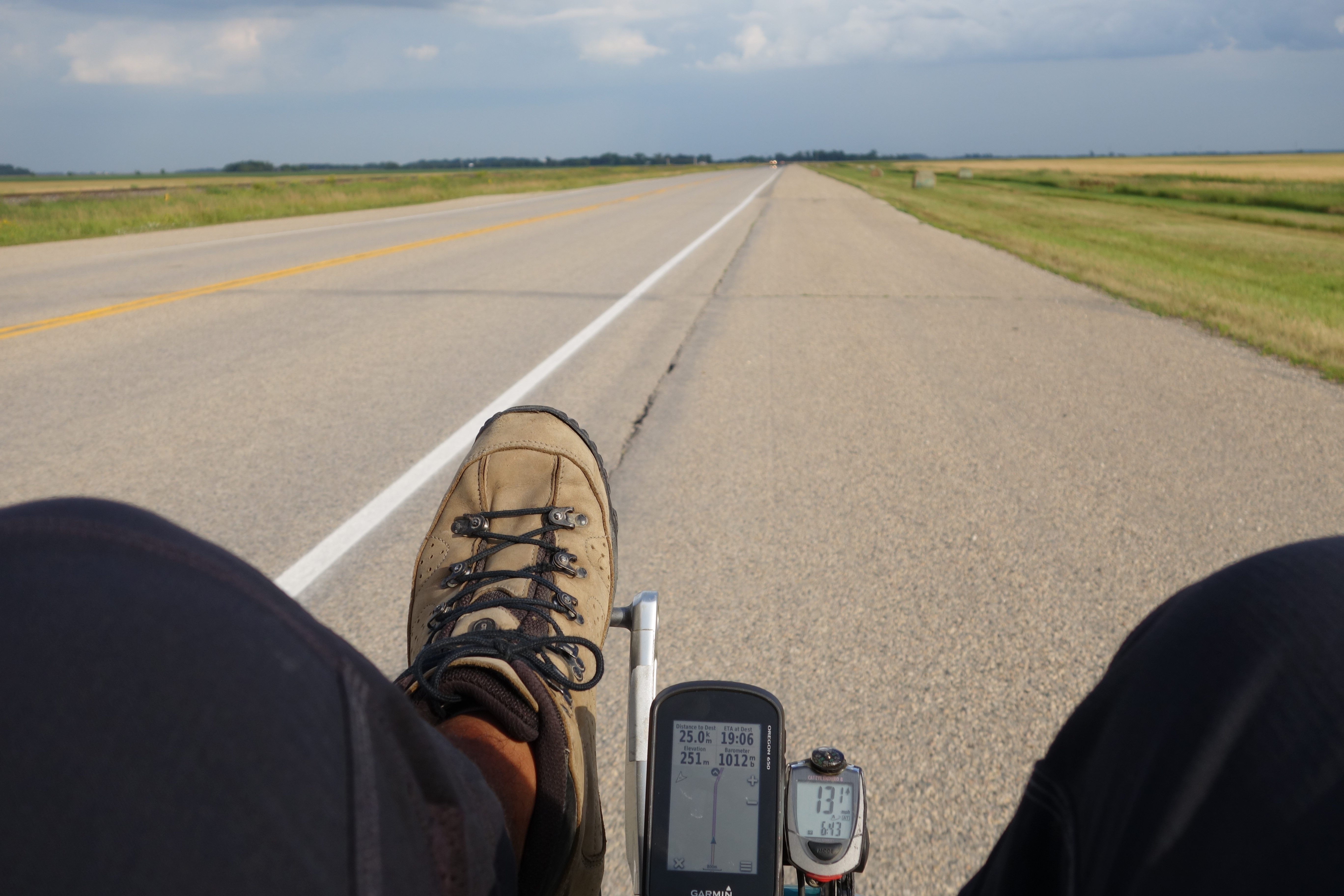 Ma-Mor-Mere, Ma-Mor-Mere! I can't find Ma-Mor-Mere!
A blonde haired, very tanned little boy approached me as I sat at a table in a restaurant in the little town of Saint Rose du Lac.
I'd stopped for lunch, and was trying unsucessfully to access their internet connection. I asked what he said, but the pretty waitress came and pulled him away as he tried to sit with me.
"Dont worry, Riker, She has just gone to the restroom. She'll be back in a moment."
He walked off, turned and came back to sit down next to me.
" I killed a fly" he said, waving his arms around.
"Are you sure?" I replied as I saw the fly escape his arms and begin buzzing at the window. He stood up and tried to swat it again but missed.
Distracted now by his Mor-Mere arriving, his Grandmother it turns out, he ran to her and said he was still hungry. "But you just ate", she said. "Oh, go see your aunt in the kitchen then..." he ran off and asked the cook for a chicken nugget and some chocolate milk.
The break was just what I needed.
The route from Saskatoon was not especially difficult. But sitting in an air conditioned restaurant in this little farming town was quite refreshing.
My food arrived. And I lost my appetite. I picked at it wondering if I was getting ill?
No, I am just very tired.
Just a couple more days before I arrive in Winnipeg and my next rest stop.
The roads have been mostly flat. Very low hills with barely noticeable inclines compared with the first part of my adventure.
What is effecting me is the heat? And to a degree the monotony of the prairies. Despite my last blog post, it does get to you.
The repetitiveness of it all.
To see a road disappearing over the horizon in a perfectly straight line is a novelty at first but soon becomes tiresome after the 30th, 40th or 50th mile.
Hectares of Monoculture farming and almost same, same towns is difficult on a tired body.
It wasn't all that bad though.
There were interesting things to see, and every day, every corner brings something new to look at and to experience.
For instance, this town seemed to have a very high population of young people between the ages of around 15 to 25. Many of the other towns I have passed through tended to have an ageing generation of very stereotypical looking farmers and their wives and you could see that these communities would be slowly dying if it wasn't for the injection of younger blood that they desperately needed.
Many of the older more traditional ways of farming are slowly being replaced by more mechanised farming techniques.
That's nothing new but in areas like the northern territories in Canada that does have a profound effect on the people and their lifestyles. I'm guessing that a similar thing is happening here has happened in the UK that many of the small farms were bought up by the big multinational companies leaving the farmer himself probably quite wealthy but it's the associated industries that rely on the farms that are also seriously affected. The maintenance, equipment supplies, vetinary services, as well as the end distribution chains for the harvested products area all affected. A small rural farmer might sell his various produce to a more local network of suppliers producers and factories where the products will be seen and used by that community, where the conglomerates might ship it elsewhere with little being given back to the locals. 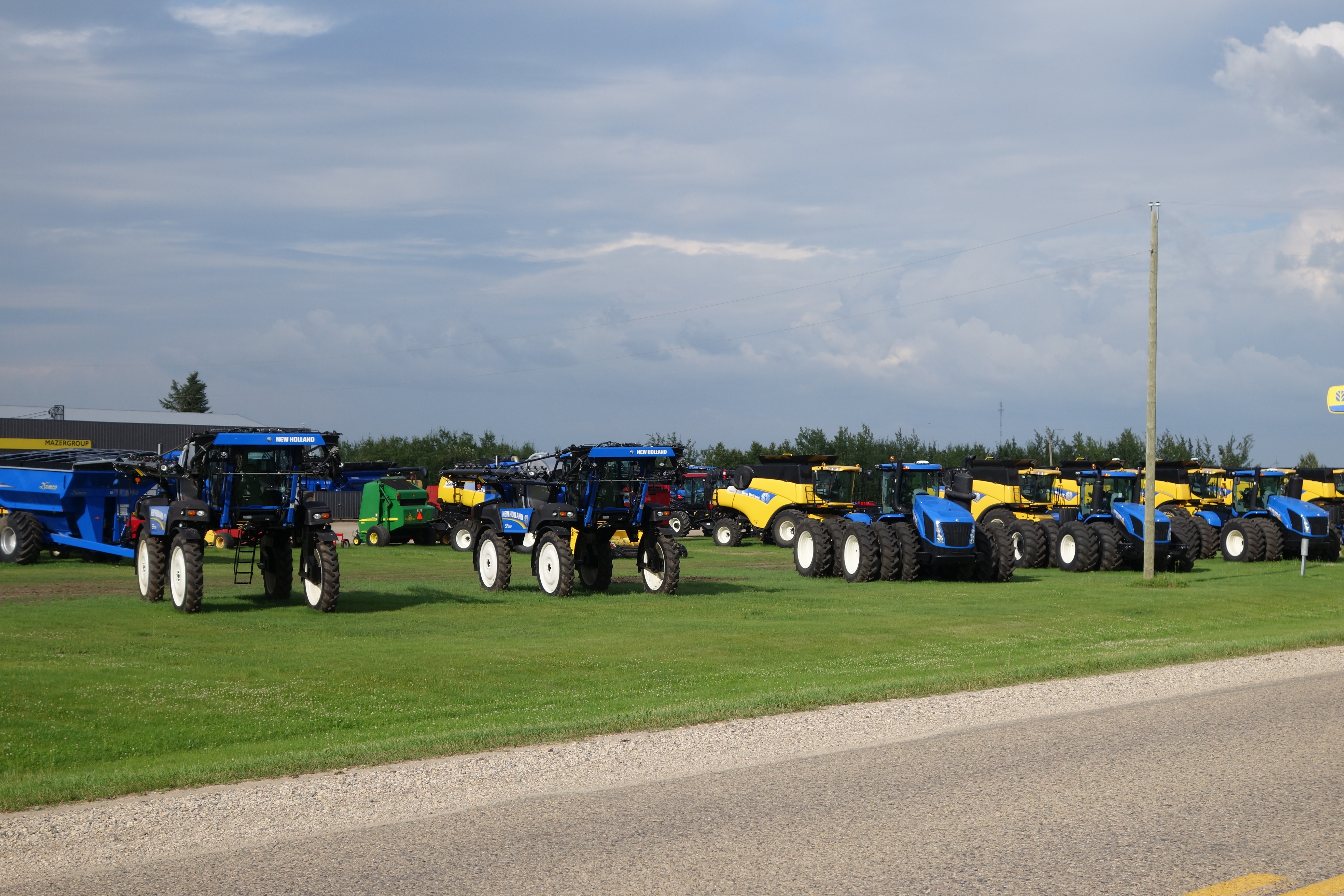 Sitting in a different cafe a few days later, I overheard Farmers discussing whether a son of another farmer might inherit and continue to run the family farm or not. The consensus seemed to be that it would likely shut down and the land sold to others. Likely a conglomerate. They seemed dejected as they continued to eat their breakfast.
These communities will likely survive though. You have to be both resourceful and skilled to make a life in these remote regions. It's what many of their early settler ancestors left their homelands for and those skills, although changing to suit the modern world, are still very much in use.

The Mennonite and Hutterite religious communities that are very much a part of creating this landscape are likely the ones that will survive the strongest. Not because of their faith, but because they choose to be a little more isolated and to a degree more independent of society as most of us know it.
They maintain strong old world Swiss/German traditions which bind the community as well as strengthen and hone skills needed to work the land. The classic example is seeing a Mennonite wooden barn with its distinctive arched roof that was probably built 70 or 80 years ago still standing where its more modern steel equivalent is a rotting mess in the corner of the farmyard. 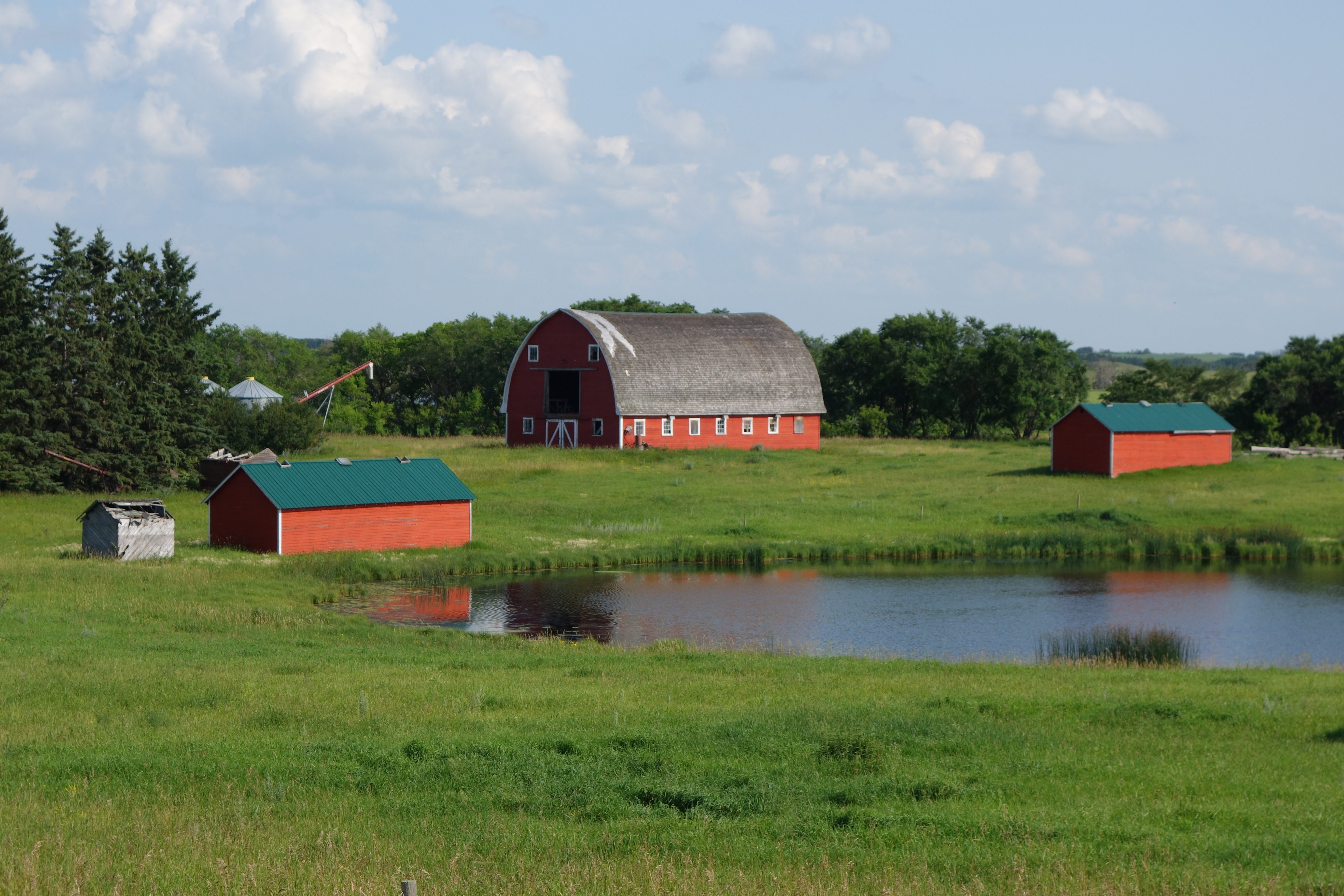 Old fashioned it may seem, but they seem to be averse to the commercialism and capitalism that is blighting the surrounding communities.

Most cyclists riding the Panamerica, don't tend to travel this way.
Usually following the traditional west coast route heading more or less directly south.
I haven't seen many cyclists since I began travelling east through Canada.
And while that makes days very long and lonely, I have met a lot of fascinating people along the way.

Canadian drivers are generally quite respectful of a cyclist on the road. The curiosity of both a recumbent bicycle and a traveller in their little communities creates excitement and a break from the norm.
"I saw you on the road a ways back" is a common conversation starter. "You are making good progress!" another.
Then the inevitable questions about where I am going, what I am doing it for and of course the look of perplexed shock when I speak of the final destination.
I was even given a $5.00 gift from an old lady sitting at the opposite table in a restaurant. She insisted I bought breakfast with it the following morning.
"It's my brothers birthday today and he would want you to have it" She said.
Her brother as it happens was sitting next to her and amongst other issues appeared to be deaf and partially sighted didnt seem to know what was happening but was clearly enjoying his burger and fries. I said thank you and continued eating my meal. 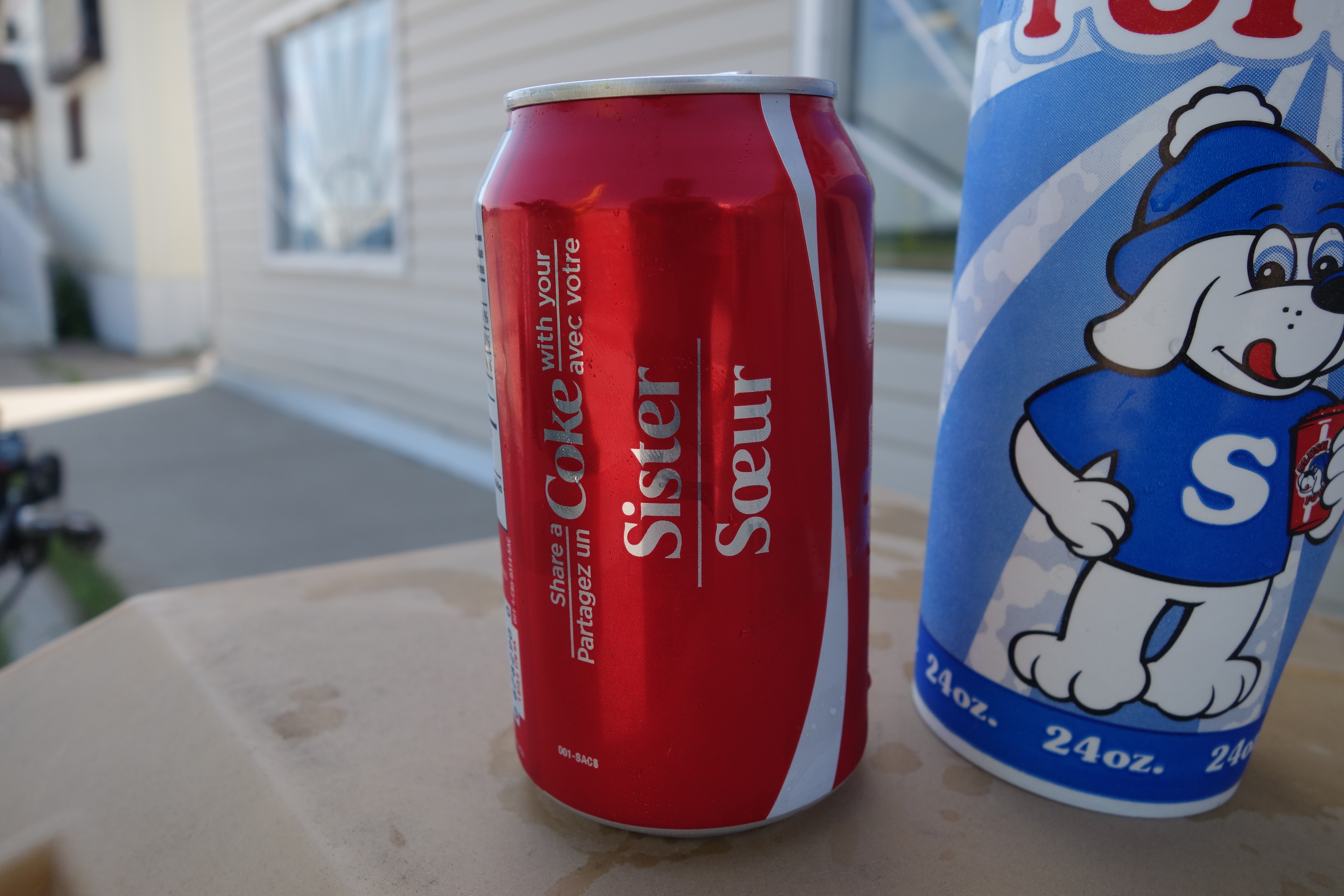 I tend to eat locally when I can. It was much harder in the north to get food in some places.
I enjoy food and I like to try new dishes.
On the Dalton highway and in the north of Canada, there were many isolated sections and there I carried and prepared food.
I still carry some reserve dehydrated meals in case of emergency. But now, as I travel through areas with a greater population, food is a little easier to obtain.
Since my teenage years I have suffered with the effects and after effects of Ulcerative Colitis so I am particularly careful about what I put in my body.
That isn't to say I don't eat junk food, I do, and I enjoy it but still try to eat a healthier meal when I can.
Food is now also fuel more than it ever was.
I don't know how many calories I burn per day, but know that on occasion I have certainly not had the recommended amount for this type of extreme riding.
Dehydration is potentially a serious issue though. 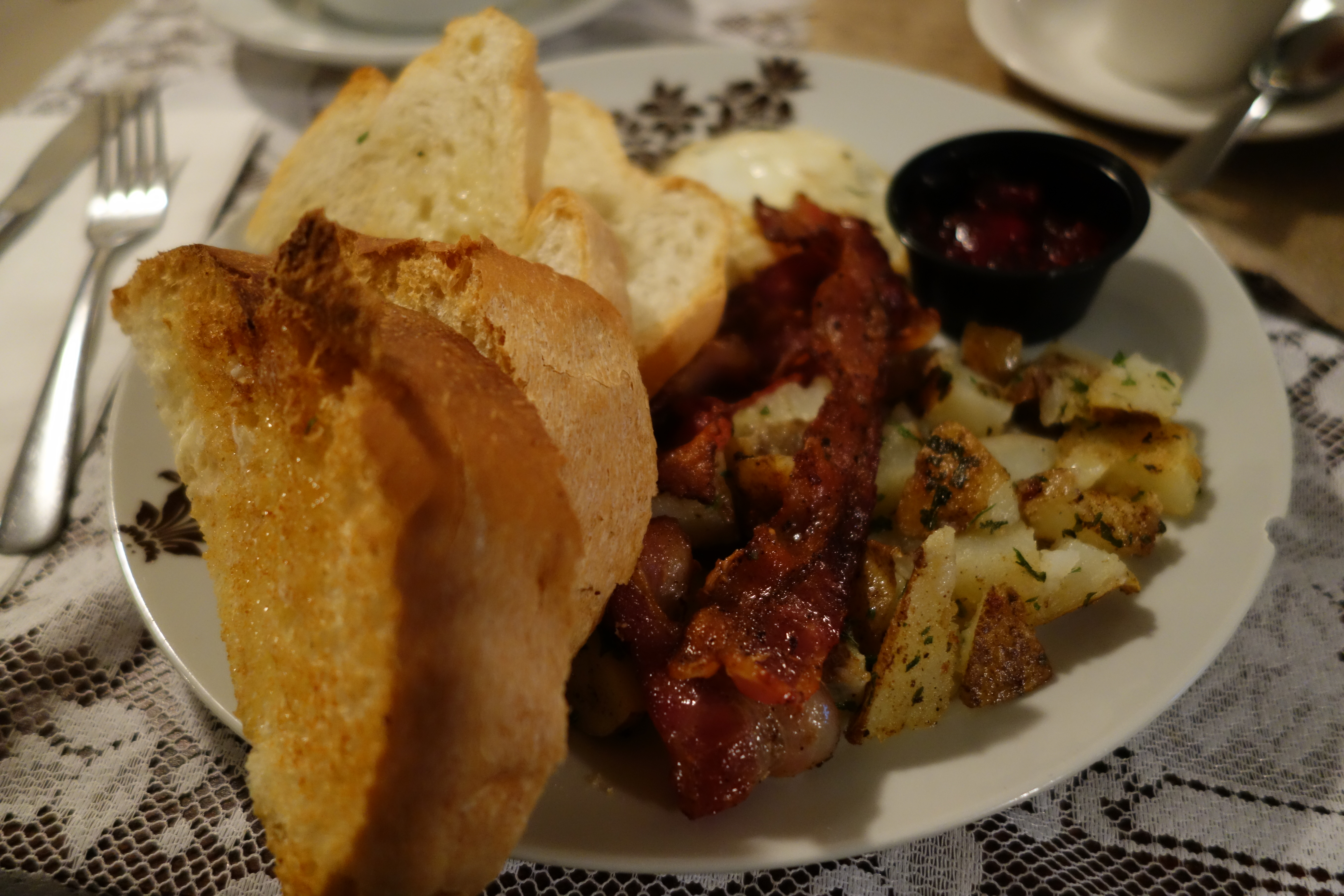 I carry around 5 litres of water and often need to refill. I can do this by filtering my own from streams or lakes, but usually by asking someone to fill my bottles.
Health is important. As is better Sun protection it seems! 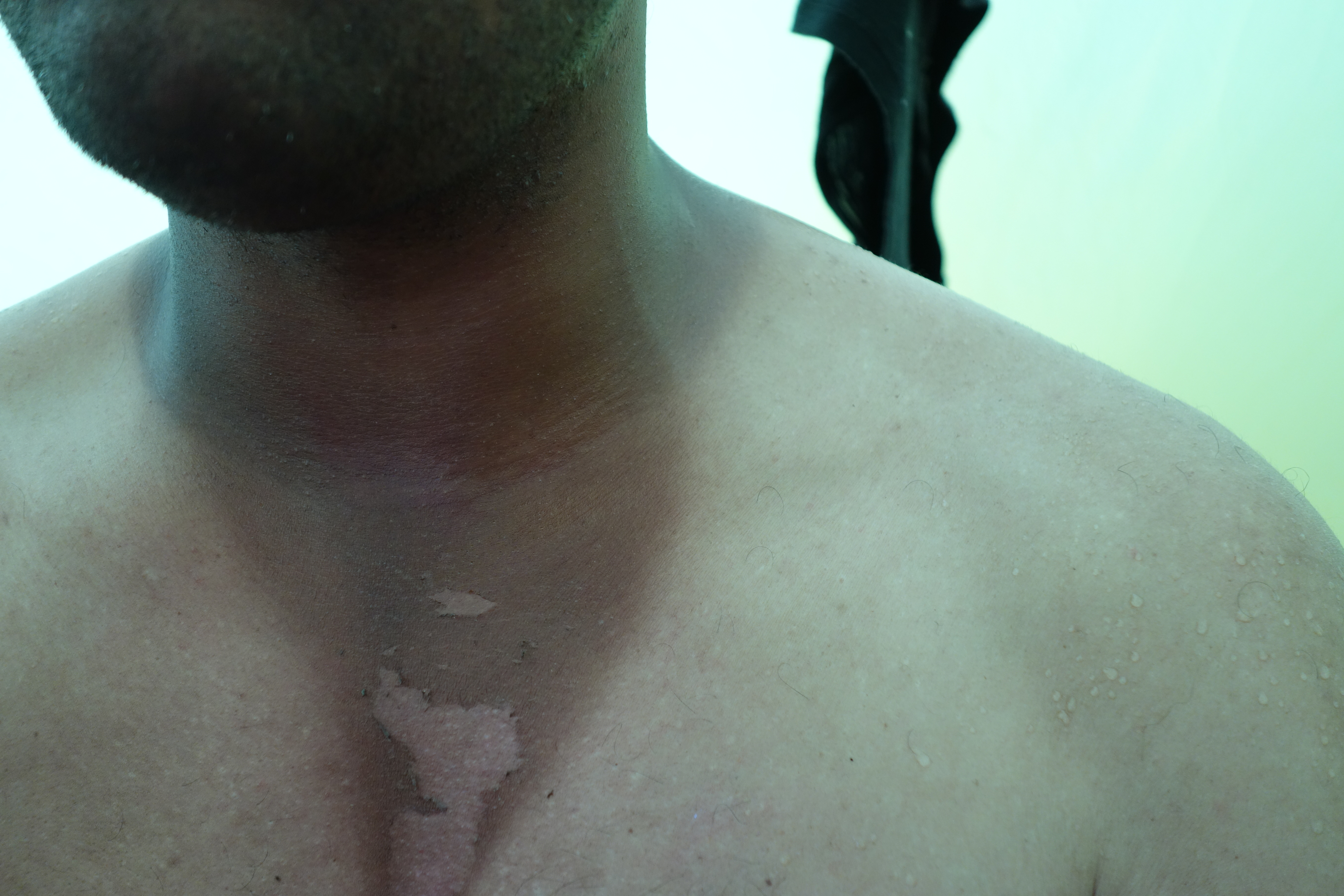 At Dauphin, I felt no desire to camp in the nice but very public campground, so I sent a last minute message through Couchsurfing.
Despite having had an account for several years, I have never used it much and in fact had sent several messages with little or no response. I didn't expect one this time either.
However, within 30 minutes, I received a message from Celeste who invited me to use her pleasantly scruffy caravan.
Full of little ornaments, trinkets and scribblings of an active and creative mind.
A keen artist, graphic designer, traveller, DIY'er and jam maker extraordinare, I had a comfortable night as well as an evening meal prepared with home grown vegetables and lots of interesting conversations. The final leg of the prairies through Manitoba was marked by my second puncture of the journey, thunderclouds and both powerful tailwinds and headwinds. 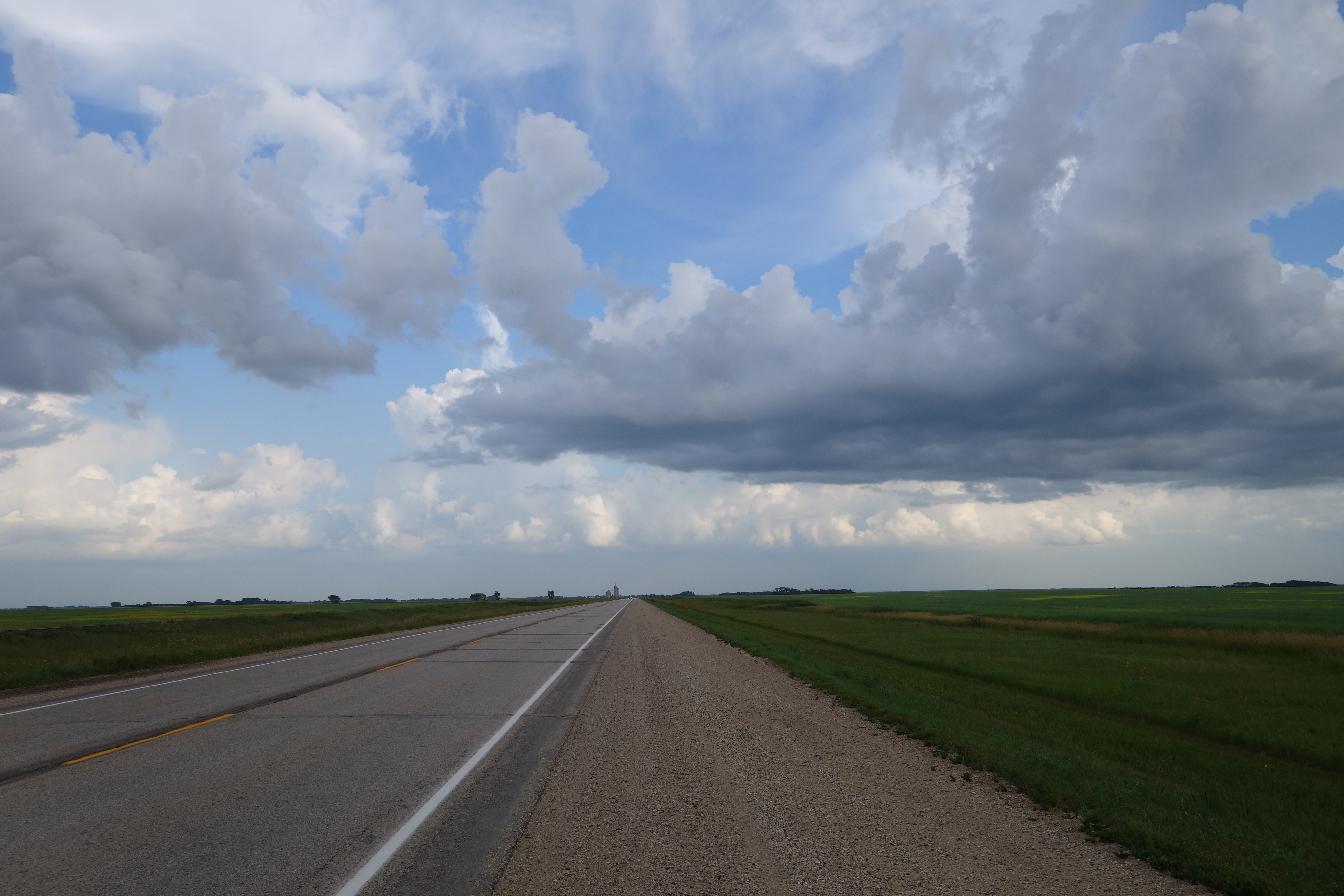 More significantly though I have reached the half way point of this leg of my journey.
I write from Winnipeg, Manitoba.
Roughly in the centre of the North American continent having also spent a couple of nights with Ian and Sheri in their home.
My route ahead is not fully planned, but the destination will be New York. To arrive by the end of September hopefully.
I estimate I have around 2500 miles before my arrival.
While I dont have a significant time limit, I want to begin the next phase before the cold weather begins to take hold again.
Though tempted to drop south and into the USA, I will continue through Canada as I am really enjoying the scenery, and people and the riding.
I'll have plenty of opportunity in the future to make comparisions I'm sure, but for now I continue east.