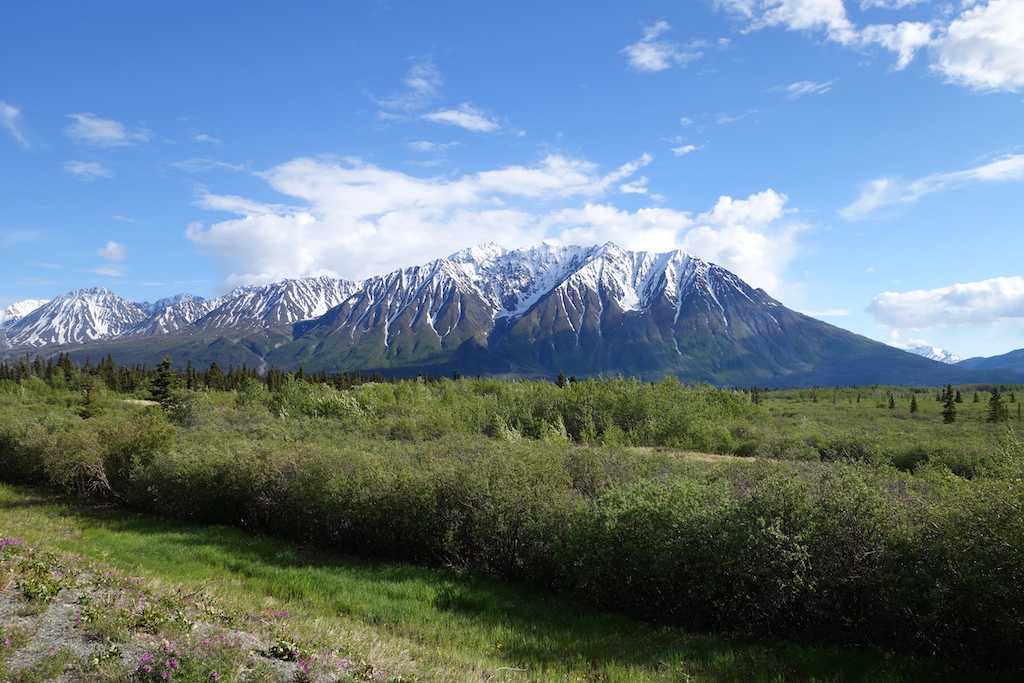 My wheel was sent off yesterday and I have little to do till it returns. I have a few chores of course, but just a few.
Fairbank is a huge city in terms of area, but only has a population of around 30,000 inhabitants. There isnt a town centre as such, and it took me around 2 hours to find the shopping malls.
Of course, most Americans drive huge pickup trucks here so the distances are irrelevant and in Alaska moreso. It is such a vast state.

Walking around the super markets for me is a good marker of a community. And looking at the prices alone, its clear to see that very little is local.
Everything has to be shipped in from the lower 48 states.
Alaska is a very isolated state and while people do live in the wilderness they often rely in a subsistance living. Hunting and trapping their meat, in the form of Moose, Caribou and Bear. But any Veggies or fruit, likely have to be bought in as the growing season is so short this far north.
Of course, that is if you live out in the boonies. In the bigger towns and cities, you go to the supermarket like everyone else.
Except here, as well as the usual rubbery bagels, oranges, milk and washing powder, you can also buy Quad motorbikes Skidoo's and a whole array of different guns, rifles, pistols, bullets and all sorts of different hunting and trapping gear.
Third aisle. Turn left, just after the toilet rolls!

My Fairbanks host, Duncan and his family have been absolutely outstanding!
I cannot thank them enough for allowing me to stay in their home for almost a week.
I had a fantastic time with them and learned a lot about living, working and cycling in -40C winter temperatures.
What I was told, really puts the UK to shame when it comes to cold crappy weather.
These people barely complain unless the temperature drops below -60c for a week or more!
Roads work, Kids go to school, Weekend shopping, cinema, meeting friends for coffee.
Life carries on as normal. Though you do have to remember to plug in your car in the evening to make sure you can start the engine next morning.
Stories also of Duncan's adventures in and around Alaska, flying planes, helicopters and in the volunteer fire service. Tales of rescuing car crash victims from wayward Moose, crossing the road at the wrong time amongst many other adventures.

My wheel took a rapid 6 days to return though I did pay a premium and got less than polite service from the USA repair centre, I hope the wheel will last the duration of the trip now.
I was due to leave that Saturday, but a group of 3 cyclists arrived to ride the Dalton highway so I stayed for an extra day to swap notes.
Lucille, Tim and Brad were a team formed on the road with the goal of riding it north and hitching back.
We spent an afternoon together in Fairbanks enjoying the sunshine and a local folk music festival. 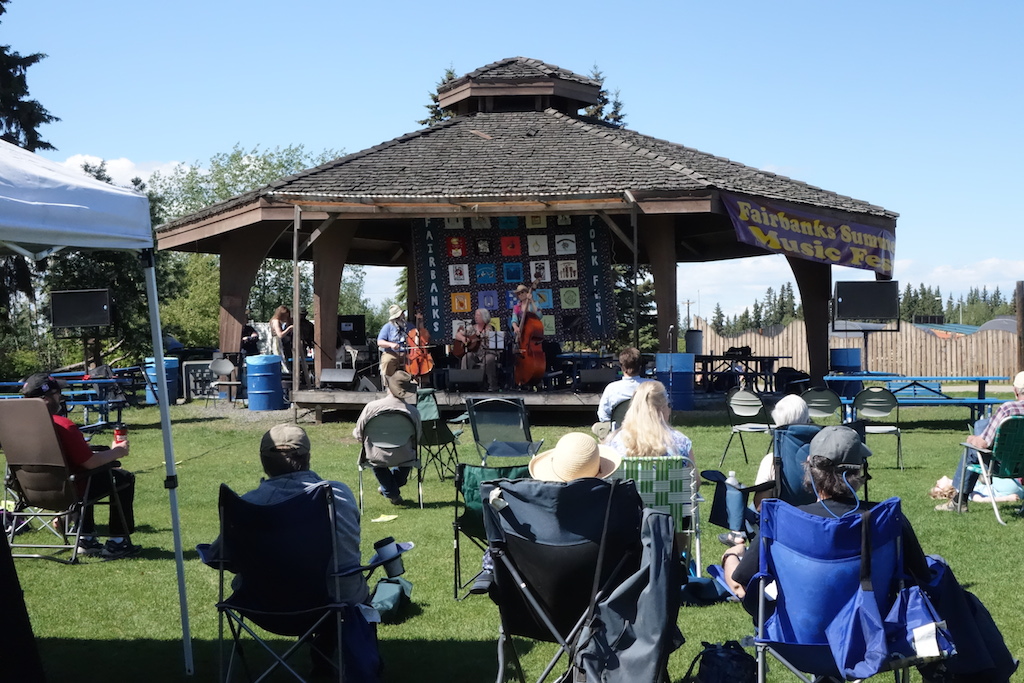 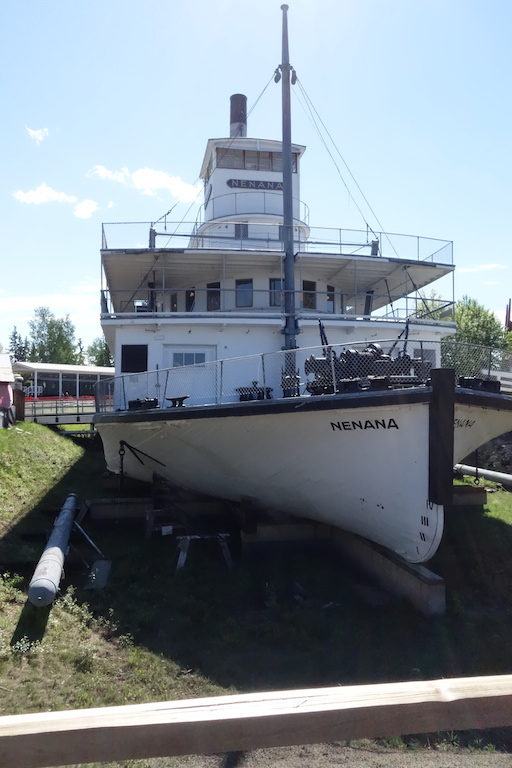 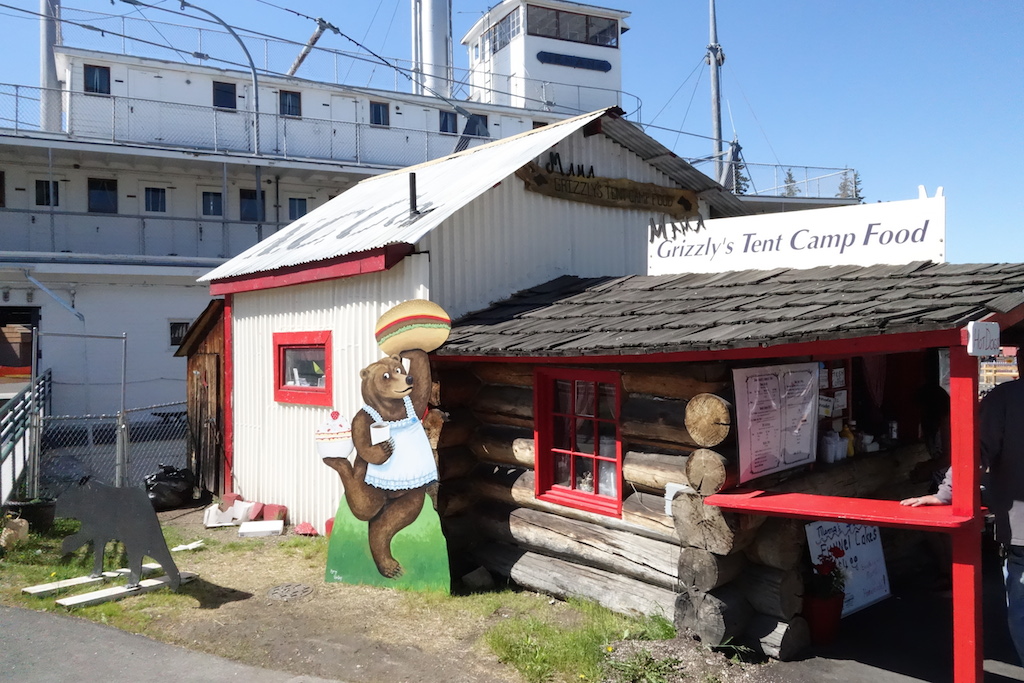 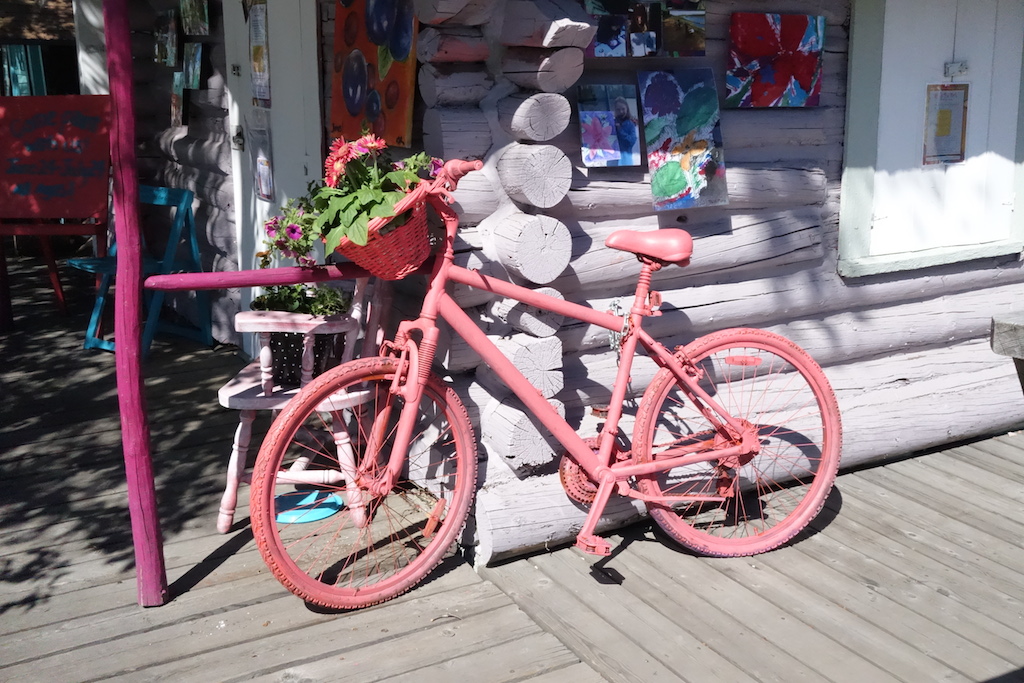 That evening I gave my bike a once over before riding the next day.
I noticed the rear tyre had torn on one side. A big bulge where the tyre would eventually split. So I patched it up, and hoped it would last a bit longer. The next day, the little group of us cycled a short distance together till we eventually went on our separate journeys. Them north, me south.
Duncan excelled himself again by offering the keys to his lakeside cabin, so I had a safe location for my first night out of Fairbanks. 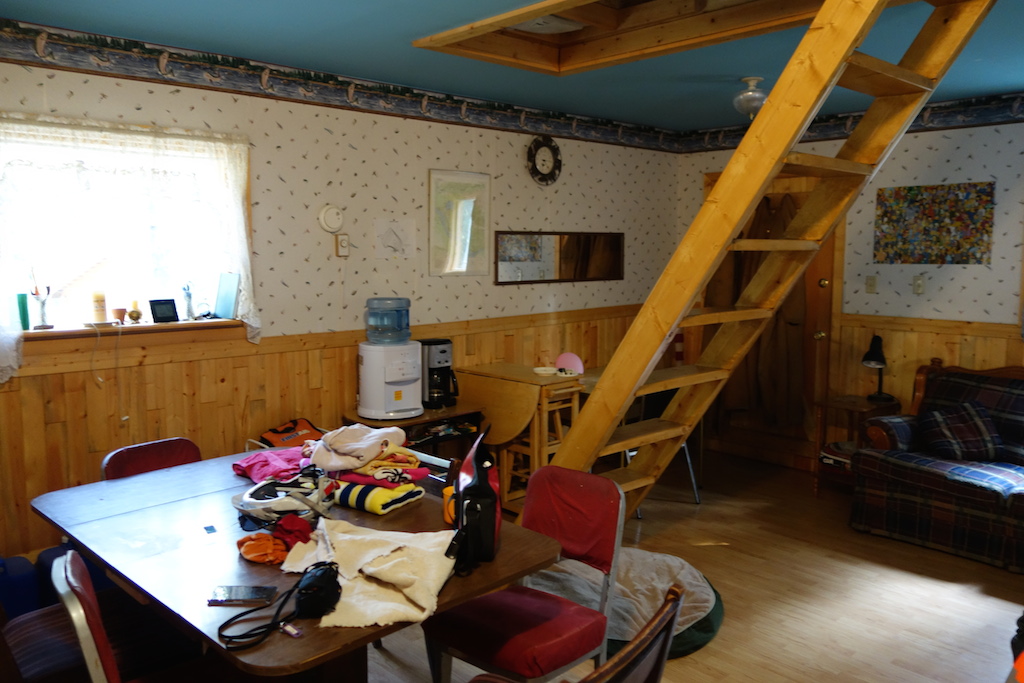 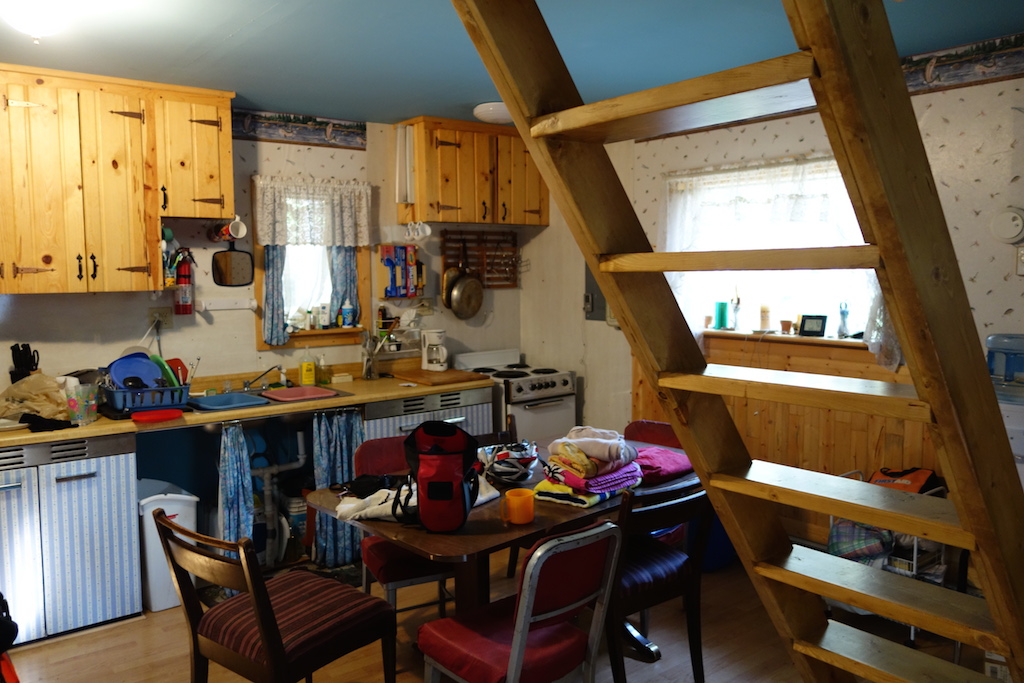 Thanks again Duncan. You are truly legendary!

The road continued relentlessly up and down. Nothing too steep or challenging, but enough to need to keep up the pressure. 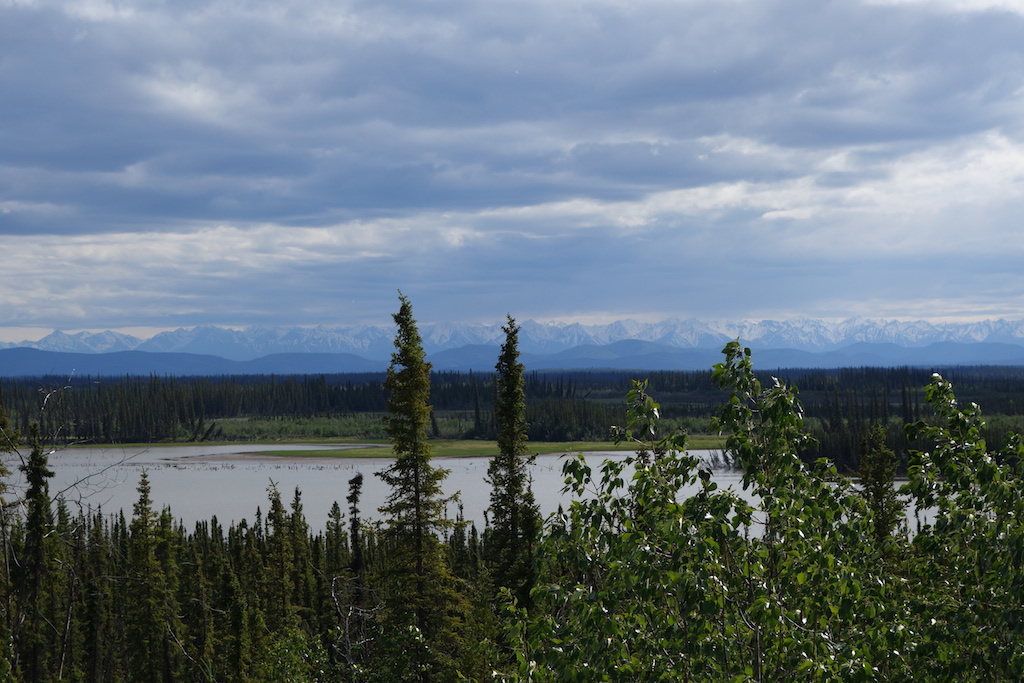 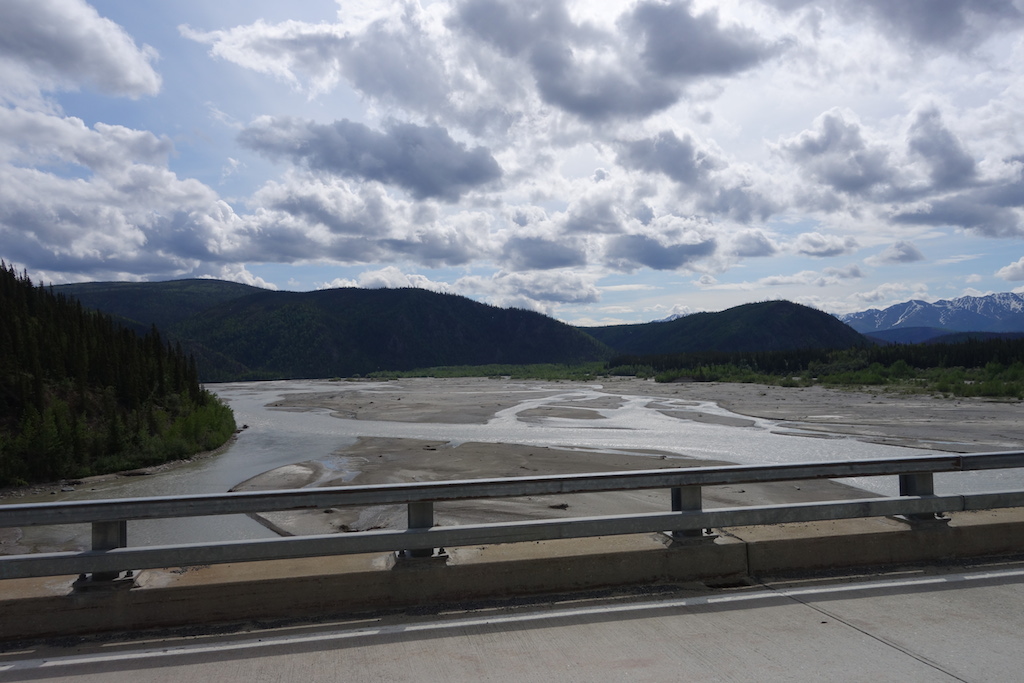 Heading along the Richardson highway was mostly flat initially, then with some low rolling hills. As the forest starts to encroach on the road, the fear of the large animals starts to build again.
Quite irrational really. They probably heard me a long time ago and turned and ran. Until I saw my first Moose that is. At first I thought it was a Horse. Then a second glance, I looked at an animal which was half as big again as any horse I have ever seen!
I stopped rapidly.
It stood there staring at me and I was unsure what to do. Hiding half in the forest, some 20 metres from the road, it didnt move. I thought it wise to get past, as I didnt know what the safe limits are.
Would it stay there or charge me
As I moved it stared a moment longer then turned and ran back into the forest. My heart beating with exhilaration.
Continuing on, I picked up a tail wind and was making good speed. The road was flat following a lake and at a scenic viewpoint I stopped to take in the view as well as some more calories.
I happened to glance at my tyre again.

It didnt seem to be getting worse, so I pressed on.
30 miles later..

As my tyre exploded I wobbled a few extra metres down the road.Then braked.
The tyre had actually torn in a different place.
Inspecting it closely, it would tear again so I replaced it with my spare.
At Delta Junction I stopped for a sandwich then switched to my third highway. 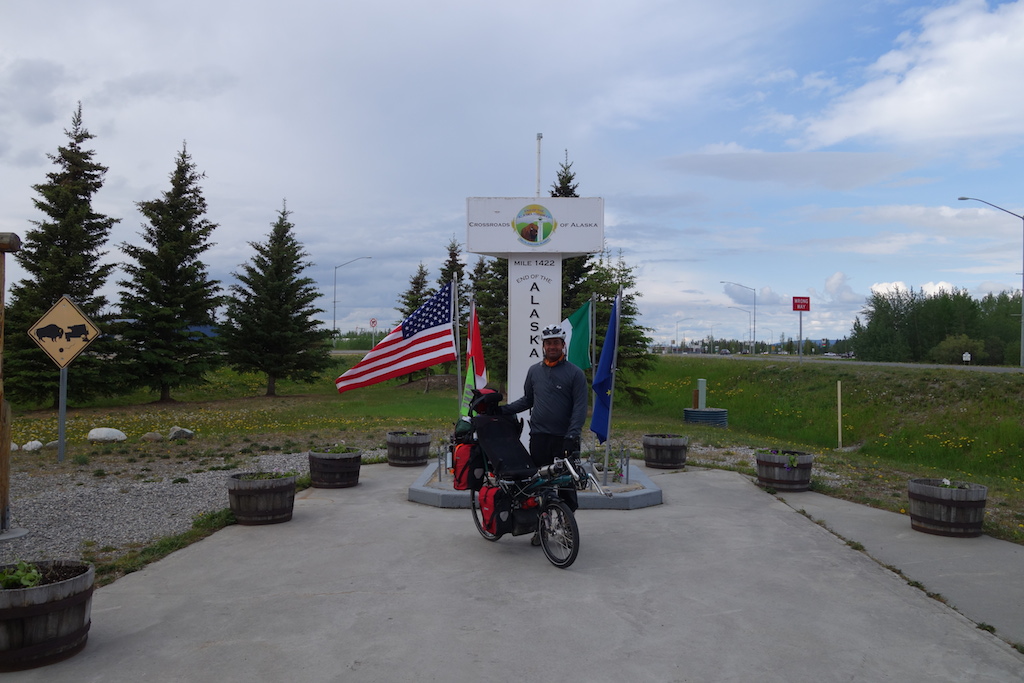 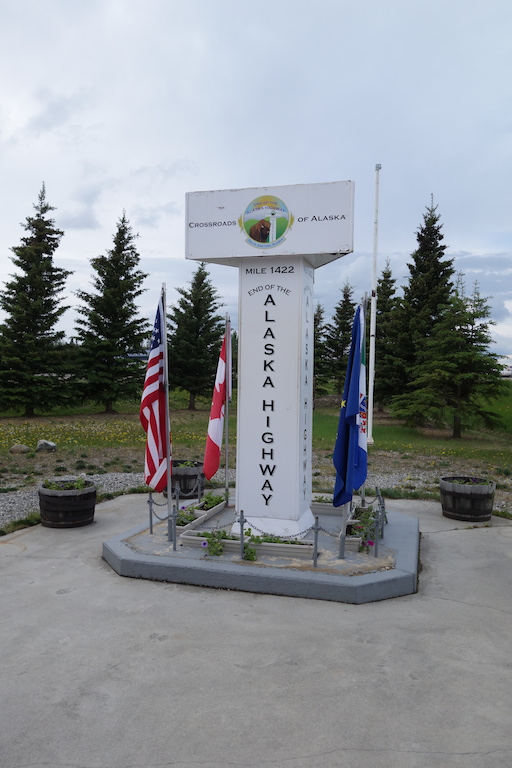 I had a tailwind for the rest of the day, so pushed on. As night fell ( I use the term loosly as it is still light throughout the night) I was getting tired but the terrain now turned wet and boggy. No place to camp or hide.
My tired nerves made more tense by my first Bear sighting. A large black bear shape ran across the road some distance ahead and disappeared into the forest.
I kept pedalling but made a lot of noise as I passed the spot hoping it had not decided to double back.
It hadn't
Now getting late, I hoped that Dot lake had a campground or something similar. A space to hide for the night.
As it approached on the map, to my surprise, I discovered a working Post office in the middle of nowhere and a collection of ramshackle houses.
A light was on inside one and I tentatively knocked on the door.
Guests at such a late hour are not usually welcomed!
Jim Nelson, a retired engineer answered and kindly showed me to a flat area behind his house. Close to the edge of the lake. He told me not to panic if I heard rustling or animal noises as it was probably the Beavers coming to collect the branches from the surrounding trees and bushes.
After a 95 mile day I heard nothing.
I didnt eat, and within 20 minutes of setting up my tent, I was asleep.
The following morning the sunlight was bright in my tent but I was woken mainly by the powerful sound of a pack of Wolves...